Thanks to DNA testing, we have seen a number of individuals exonerated after years, sometimes decades spent behind bars for crimes they did not commit.  Sadly, under current state law, an innocent person who is on probation or parole does not have the same access to the technology that can help clear their name and restore their dignity. This bill would open access to DNA testing to these individuals, so they can stop living under the shadow of guilt and finally be free.

The bill also authorizes the court to order law enforcement officials to submit DNA evidence from a crime scene to the Combined DNA Index System (CODIS) for testing, and to order the State Police laboratory to evaluate private laboratories for compliance with certain FBI standards.

Recently, I went back to Dwight-Morrow, my high school, to promote my bill (A1672)  that requires youth sports programs and cheerleading programs to have written head injury policies.  I joined U.S. Senator Bob Menendez and Congressman Bill Pascrell who are advancing similar legislation (SAFE PLAY act) on the federal level.  Concussions, we now know, can be very serious - every three minutes a young athlete is treated for a sports related concussion - having a plan in place when they occur, will make a real difference in keeping our children healthy. 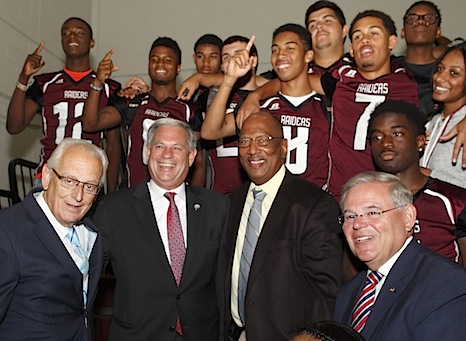