Let's Get This Done, Governor

Atlantic City residents are counting on the Governor to do the right thing here. Enough of the tough talk and the political grandstanding, let's meet at the table and figure out what is best for Atlantic City. We cannot leave the voice of public employees and city residents out of this discussion. As the members of legislature and the Governor, it is our obligation to look at all sides of an issue and take necessary action in the best interest of citizens of New Jersey. No more stalling. 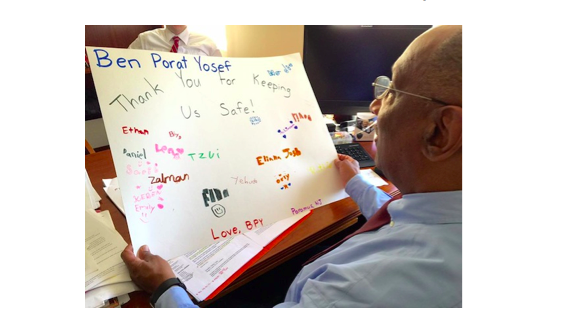 Thank you to the students of Ben Porat Yosef for such a thoughtful card! We will keep working in Trenton to protect our children and improve school safety.  I was proud to join my colleagues this week in support of the "Secure Schools for All Children Act."  This measure establishes a program for security services, equipment or technology to ensure a safe and secure school environment for nonpublic school students. This bill passed in the Assembly 74-0 and now heads to the Senate for consideration. 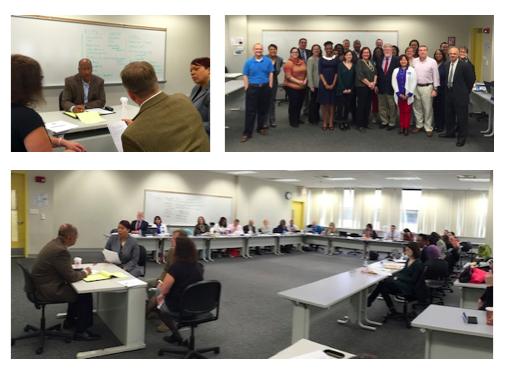 I was thrilled to participate in a day of legislative advocacy with the Policy, Politics and Public Affairs doctoral class at Bergen Community College.  The policy and legislative proposals presented by the students were substantive and offered keen insight into many of the complex issues we face in New Jersey. I look forward to our continued discussions and advancing our priorities in Trenton. My sincere thanks to Dr. Ellis, Dr. Mullaney and the wonderful students for inviting me to be a part of the forum.

Senator Lorretta Weinberg and I are honored to serve as directors of the State Legislative Leaders Foundation.  For more than 40 years this non-profit, non-partisan organization has fostered the professional development of senior legislative leaders, nationally.  In April, I traveled to China to take part in a cooperation forum establishing a partnership, endorsed by President Obama and Chinese President Xi, linking the SLLF and the Chinese People’s Association for Friendship with Foreign Countries.  I was honored to represent the United States and oversee this important new initiatve. This exchange was a forum to examine complex public policy, establish mutual friendships and share ideas.

Assembly Bill – A2689  “Secure Schools for All Children Act.”

A three-bill legislative package sponsored by Assembly Democrats to provide schools with the financial resources needed to fund security enhancements gained approval from the Assembly on Thursday.

The first bill (A-209), sponsored by DeAngelo and Pinkin, would exclude certain increases in school security expenditures from the tax levy cap applicable to school districts. Under current law, school districts may increase their tax levies, with certain exceptions, by no more than two percent relative to the prior budget year. The bill provides that any annual increase in expenditures on school security costs in excess of two percent incurred by a district would be excluded from the limit.

The second bill (A-2158), sponsored by Diegnan, Coughlin, Holley and McKnight, would provide that a school district may use its emergency reserve fund to finance school security improvements, including improvements to school facilities. Under current law, a district may only withdraw money from the emergency reserve fund to pay the cost of unanticipated general fund current expense costs.

The bill also would allow proceeds from bonds issued by the Economic Development Authority to finance the state's school construction program to be used to fund school facilities projects related to improving school security.

The measure was approved unanimously.

The last bill (A-2689), sponsored by Schaer and called the "Secure Schools for All Children Act," would establish a state aid program for the provision of security services, equipment or technology to help ensure a safe and secure school environment for students in nonpublic schools.

Under the provisions of the bill, the superintendent of schools of each school district where a nonpublic school is located would confer annually with the chief school administrator of the nonpublic school in order to agree upon the security services, equipment, or technology that will be provided to the students of the nonpublic school within the limits of available funds. If the two administrators are unable to agree on the security services, equipment, or technology, then the executive county superintendent would be tasked with making the final determination.

The measure was approved unanimously.

It is with tremendous shock and disbelief that I join the voices of despair throughout the community expressing profound sadness with the passing of my dear friend and colleague, Teaneck Mayor Lizette Parker.  I will remember Mayor Parker as a hard-working and dedicated public servant who was beloved by her community.  Lizette was a trailblazer: leaving an important legacy by becoming the first African-American woman to serve as mayor in Teaneck and in a Bergen County municipality.  We can learn much from Lizette’s example, her commitment to serving others, her strength and grace, and more so, her accomplishments in Teaneck.  I would like to extend my deepest condolences to Lizette’s family and friends, especially her husband Anthony and daughter Alyssa.