A Time for Action

Following the deadliest shooting in modern US history, the time for all elected officials to take action has long since passed. With 59 dead and over 500 wounded, we need to urgently pass common sense gun safety legislation.  As a former Sheriff, I have always made the health, safety, and wellness of our residents my top priority.  As your Assemblyman, I have crafted important gun safety legislation to help keep our children and families safe from plague of gun violence.  Sadly, time and time again, these significant measures have not been signed into law by the Governor.  With every ounce of my heart and soul, I will continue to fight to help keep our community and our children safe. We must take action.

We have been holding hearings to investigate NJ Transit’s performance, and reports of discrimination and harassment.

At the most recent hearing, we learned about multiple settlements and trials in recent years that should sound the alarm for the state to investigate claims of racism, sexism, gender and pay discrimination. Questions of safety, training, and favoritism were raised that cannot be ignored.

Whether it’s a collective of “bad actors” that must be held responsible for their actions, even if it means removal from their positions or overhauling human resource policies governing employer/employee relations and starting from scratch, employees should be supported and protected in the workplace. It’s the law and it’s the state’s duty to ensure NJ Transit stays on the right side of it.

Eruv is important to Orthodox Community 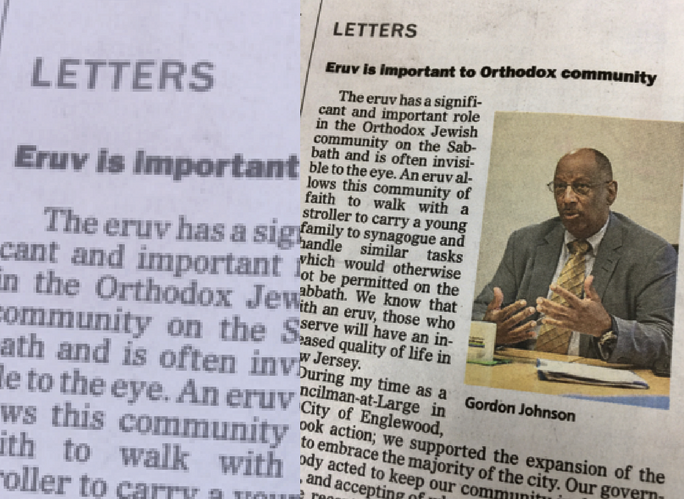 The eruv has a significant and important role in the Orthodox Jewish community on the Sabbath and is often invisible to the eye. An eruv allows this community of faith to walk with a stroller to carry a young family to synagogue and handle similar tasks that would otherwise not be permitted on the Sabbath. We know that with an eruv, those who observe will have an increased quality of life in New Jersey.

During my time as a councilman-at-large in the City of Englewood, we took action; we supported the expansion of the eruv to embrace the majority of the city. Our governing body acted to keep our community inclusive, diverse and accepting of who we are and how we pray.

The recent opposition to the construction of an eruv in Mahwah is troubling. Our great country, at a foundational level, was created to allow for religious freedoms. These liberties are enshrined in the Bill of Rights and these freedoms are a cornerstone of our Constitution. We should not allow a municipal ordinance to veil anti-Semitism and be used as a tool against a community of faith. 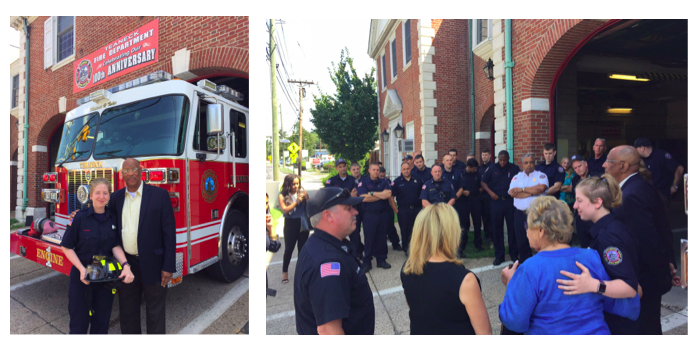 Ashley Hahn is the first women firefighter to serve in the Teaneck Fire Department.  Senator Loretta Weinberg, Assemblywoman Valerie Vainieri Huttle, Bergen County Freeholder Tracy Silna Zur, and I presented her with a resolution at the Fire House to celebrate her accomplishments and mark the Department's important milestone! Congratulations Ashley! Thank you to Teaneck Fire Chief Verley and the brave first responders of Teaneck Fire.

On the 16th anniversary of Sept. 11th, 2001 we remembered those who perished in the attacks on our great country. We honor them and the sacrifice made by our 1st responders, and veterans.

On 9/11 as part of the Center for Food Action's National Day of Service and Remembrance, we packed snack packs to distribute to local children at risk for weekend hunger. Thank you to the volunteers who took part in this important effort that will bring food to thousands of children in our community.

One year ago, I stood in the Rodda Center in Teaneck, to introduce a man who has my full support to be the next Governor of New Jersey, Ambassador Phil Murphy. Phil understands our core democratic values and has a complete understanding of the challenges we face in our community.

I am optimistic about the solutions he has offered, the policy that shapes his agenda, and the principled view he has taken in support of our middle-class families. Phil is committed to growing our NJ economy, supports pay-equity, raising the minimum wage, and will work to end the gun violence that threatens our cities.

Phil is the right person to be our next Governor. He has a sound plan to move our State forward and it includes all of us. I’m proud to support him and hope you will as well. 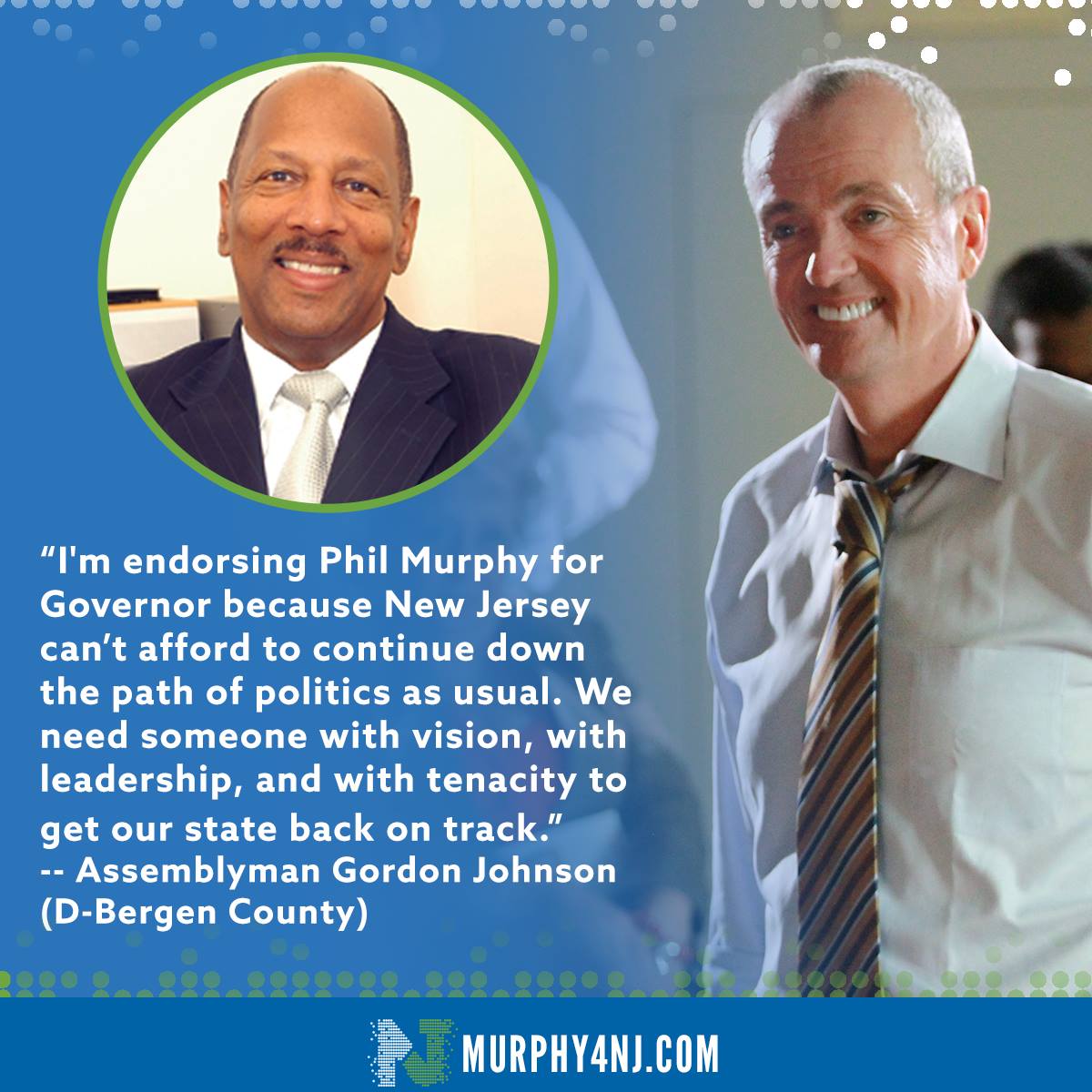 "We cannot tolerate a culture in which victims of sexual assault lack confidence in the men and women responsible for responding to them," said Johnson (D-Bergen). "Developing a course so that officers can receive training on dealing with sexual assault appropriately will encourage reporting and reinforce our state's commitment to justice for every resident."

"One of the top concerns among many New Jersey drivers is the long wait for a simple driver's license renewal at the local MVC office," said Johnson (D-Bergen). "Shifting the expiration date from the last day of the month to an individual's date of birth will ensure that everybody doesn't end up at the office all at once."

Gordon M. Johnson was elected by the people of the 37th District of Bergen County to the New Jersey State General Assembly in 2001.  Assemblyman Johnson serves in the position of Deputy Speaker, Vice-Chair of the Judiciary Committee, and a member of the Budget Committee.